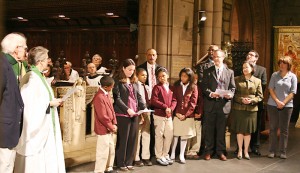 On October 2, 2011, the students and staff of Saint James School were commissioned during the principal worship service at Saint Mark’s Church, 1625 Locust Street, Philadelphia. 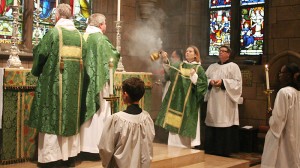 The Reverend Sean Mullen—Rector of Saint Mark’s and Chair of the Board of Directors of Saint James School—led the commissioning. 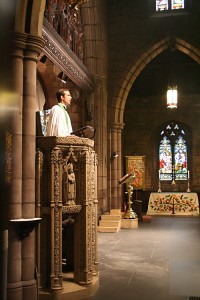 The guest homilist was The Reverend John H. Finley IV co-founder and head of The Epiphany School, a school in Massachusetts that has provided inspiration for the founding of St. James School. The Reverend Finley has helped launch several other schools inspired by Epiphany’s model, and has also been involved in initiatives throughout the educational field, including Esperanza Academy in Lawrence, MA.

Father Mullen and Saint Mark’s parishioners are longtime supporters of Saint James School, and many of the school’s advisory board members and trustees are members of the parish. 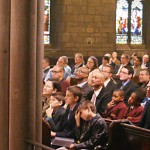 During the 11 a.m. Mass, Father Mullen invited students, staff, and board members of Saint James School to the front of the church, where he said prayers and offered a blessing on the school’s work.

Students and other guests enjoyed a festive coffee hour hosted by St. Mark’s Church at the end of Mass.