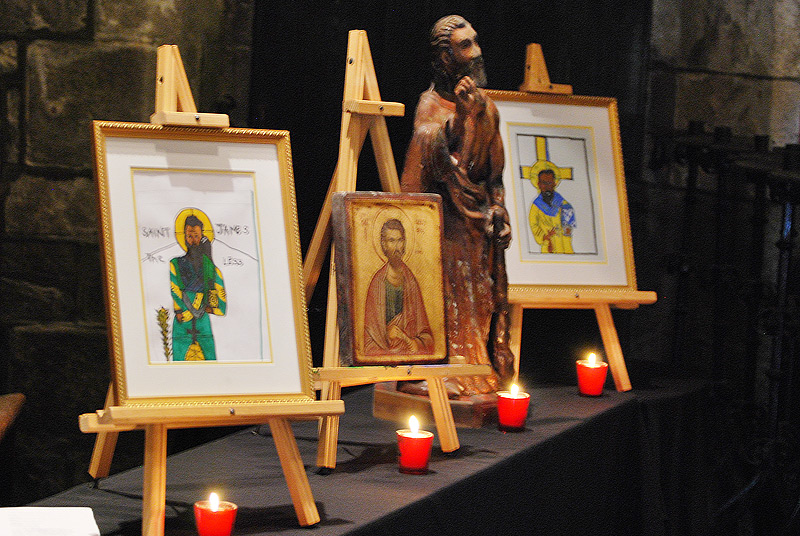 The day began with an 11 am Mass in the church. Student of the week Tyrena joined Bob Brano, Aliina and Allison Ross in ringing the bells, which sounded wonderful thanks to the efforts of volunteer Richard Swayze. Guest organist Doug Tester sounded the church organ with a beautiful prelude marking the inaugural use of the organ for a school Mass.

The service was officiated by Reverends Marie Swayze and Sean Mullen, and a truly engaging homily was delivered by Father Mullen, challenging the students to embrace the humble awesomeness of their patron, St. James the Less. He asked what it could really mean to be the less of two men named James, and that perhaps whether it was because he was shorter, younger, or just another James, it didn’t make him a lesser man but maybe even a greater man even with such a nickname. He spoke directly to the students about his and others role of bringing life back to the campus of St. James the Less over the past several years, and how they are the first to create that new life for future classes and generations to come.

After the service, Mother Marie gathered those in attendance around new icons of St. James the Less, two of which were drawn by students Tyrena and Cordell. The third icon was recently shipped from Greece and written by a monk. It will be installed in a prominent location in the school house. The students gathered around the organ for the postlude, creating awe among the students as they heard their church organ in a way they never imagined. After Mass, the school hosted a lunch which was prepared and served by families of the students, led by Ms. Cunnigham. Students sat two to a table and shared their stories and energy with guests and family.

After lunch, the students broke into groups and canvassed the neighborhood for litter. The team with the most trash upon return would be crowned the winner of the Feast Day service challenge, and it went to Ms. Dimery’s group, who called themselves “The Mick Jaguars.”

Students are proud to be a part of St. James the Less and enjoyed making comparisons to things greater or less throughout the day.