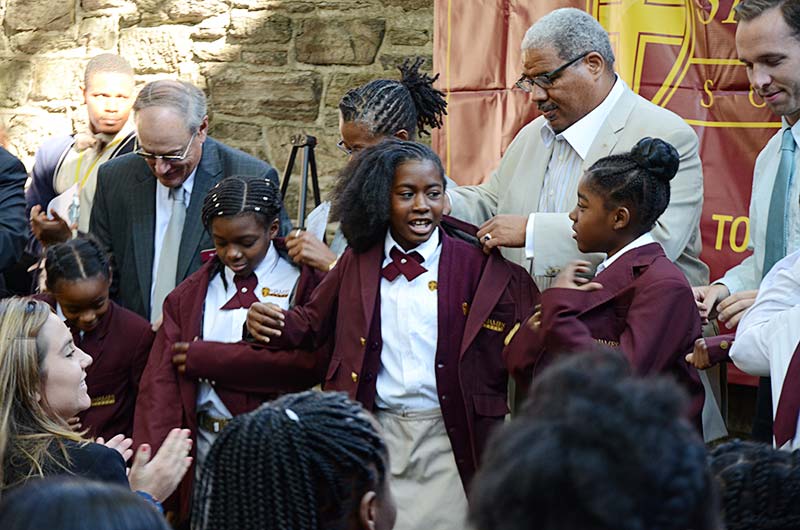 Teachers and staff gathered at 6:45am to review the plans for the day, students arrived for breakfast, followed by morning prayer and instructions for the day. After their homeroom meeting, students made their way to the front yard of the School House where they were greeted by family members and many other guests.

Trumpets led the prelude and the peeling of the bells from the Church of St. James the Less marked the beginning of the ceremony. Co-Founder and Board President Father Sean Mullen led the opening prayer, and Head of School David Kasievich followed by sharing his own words of wisdom for new and current students. Kasievich showcased some of the new additions to the school and asked students to think about their responsibilities as St. James student.

The ceremony ended with a welcome and thoughts from Father Mullen, and a musical reflection by Frank Mitchell of Opera Philadelphia, who sang “Witness,” an African American spiritual that has been near and dear to his heart since he was a child. Mitchell reminded students of the importance of spirituals in the life of the black community and how spirituals were what provided solace and support to slaves and those traveling on the Underground Railroad. The ceremony ended with Assisting Bishop of the Diocese of PA Edward Lee,  giving a final blessing and Principal Laura Dimery leading the students in their student pledge and the pledge of allegiance.