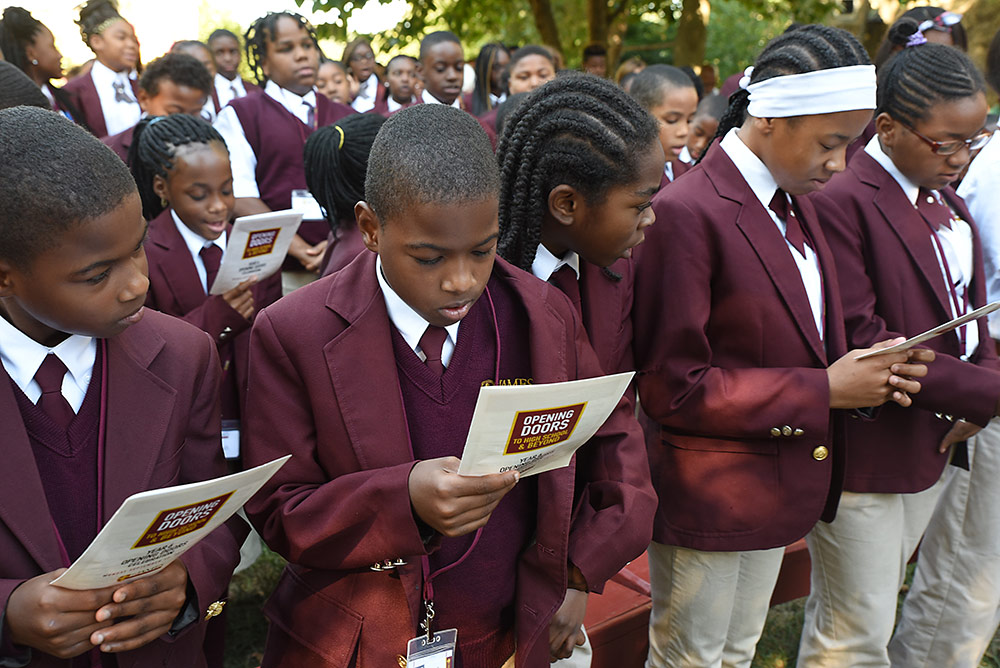 This year’s celebration featured a special guest speaker, The Right Reverend Daniel G. P. Gutierrez, Bishop, Episcopal Diocese of Pennsylvania. Faculty and staff arrived on campus before seven in the morning to prepare for this special day. After breakfast, Morning Prayer, and homeroom, the students were led to the front yard of the School House. With a blend of nervousness and excitement, the students filled their seats where they were greeted by family and guests.

After a jubilant trumpet prelude, the bells of the Church of St. James the Less rang out. Head of School David Kasievich began the ceremony with opening remarks and a welcome to one of the best dressed schools in Philadelphia. Kasievich highlighted St. James School’s growth and continuing support to its graduates. The Rev. Sean Mullen, St. James School Co-Founder and Board Chair, followed with an introduction of Mother Betsey Ivey and Father Andrew Kellner, St. James Chaplains. Mother Ivey, Father Kellner, and Father Mullen led the audience together in a warm and meaningful prayer. David McDonough, Assistant Head of School, Academics, gave thanks for the beloved supporters of St. James, parents, volunteers, friends, partners, and donors whose dedication make the school’s mission come to life.

With pride, Opening Doors Blazer Ambassadors flanked the podium and presented the new students with their signature maroon St. James School blazers. This diverse group of ambassadors, including clergy, community leaders, and school supporters, delighted in meeting the newest students. Mr. McDonough and Dean of Students Fabian Austin called each new student by name to receive his or her uniform jacket from an assigned ambassador.

After this moving musical reflection, all of the participants read aloud the St. James School pledge followed by a very enthusiastic Pledge of Allegiance. The Opening Doors blazer ceremony has quickly become a cherished celebration for the students of St. James School, an opportunity to be showcased, celebrated, and loved by the supporting community as they open the door to a new school year.