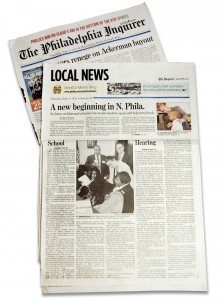 A new beginning for fifth graders at the new St. James School

For the fifth graders at St. James School in North Philadelphia, Wednesday was a day of firsts.

First day of class for the first students at the city’s first Episcopal middle school for low-income children.

With the help of donors, philanthropists, the Episcopal Diocese of Pennsylvania, foundations, and area private schools, St. James welcomed its inaugural class of 16 fifth graders Wednesday morning for a typical nine-hour day that included a morning meeting with prayers, an art class inspired by ancient cave paintings in France, and a math challenge.

On Tuesday, the eight boys and eight girls in crisp khaki and maroon uniforms participated in a morning ceremony unlocking the wrought-iron gates to St. James’ leafy campus near Laurel Hill Cemetery.

The school began as a vision six years ago of the Rev. Sean Mullen, rector of St. Mark’s Episcopal Church in Center City, to provide high-quality education for low-income children.

The middle school, which will add a grade each year until it encompasses eighth grade, is housed in the 1840s stone buildings of the former St. James the Less Episcopal Church on Clearfield Street.

The property was abandoned in 2006 after the Episcopal diocese won a long court battle with a conservative parish that had severed its ties with the diocese. For a few years, St. James the Less had a tiny private elementary school that offered classical education focusing on Latin, grammar, logic, and rhetoric, but it closed in 2003.

After extensive talks with neighborhood residents about the educational needs of their children, Mullen, members of his congregation, and other supporters decided to open a middle school. The school became one of St. Mark’s missions and ministries.

St. James is modeled after the Nativity Miguel network of private – mostly Roman Catholic – inner-city schools for low-income students of all faiths.

Mullen said he was inspired by a visit to the Epiphany School in Boston’s Dorchester neighborhood, the first Episcopal school in the network.

“I knew, seeing not just the school but especially the students and hearing the stories of those students . . . I knew this was something we needed in Philadelphia,” Mullen said.

Based in Washington, the Nativity Miguel network includes more than 60 independent faith-based schools, including Lutheran and Presbyterian schools. St. James is the sixth Episcopal school in the network, said David Kasievich, the school’s executive director.

Members of the inaugural fifth-grade class were drawn from nearby public, charter, and parochial schools. All students live within walking distance of the school.

Although St. James is spending approximately $22,000 for each student this year, Kasievich said most students’ families are paying fees of $20 to $30 per month for an academic program that includes art and music several days a week.

St. James and supporters and board members – many of whom were drawn from St. Mark’s – raised $400,000 in 18 months to open the school. They expect to raise at least that amount every year to cover the school’s operating costs.

“We’ve been unbelievably lucky,” said Audrey E. Evans. The retired chief oncologist from Children’s Hospital of Philadelphia and pediatric cancer activist heads the St. James advisory board. “We would never have done this,” she said, “without the help of the churches and schools and people interested in education.”

The Lenfest Foundation, for example, provided a $100,000 challenge grant; William Penn Charter School, the nearby Quaker school, is providing the school lunches; Episcopal Academy in Newtown Square will send high school students to tutor; the School at Church Farm in Exton has sent students to help rake the grounds. St. Mark’s support includes handling the school’s bookkeeping and payroll.

The Episcopal Diocese of Pennsylvania’s principal contribution is allowing St. James to use the property for the nominal fee of $5 a year. A parish endowment helps cover some of the maintenance costs.

“The property is an incredible gift,” Evans said.

By the time that students are in eighth grade, St. James plans to work with them and their families to ensure that they continue their educations at good public or private schools. And the school has promised parents that it will continue to help their children while they are in high school and beyond.

The school’s goal, Mullen said, is to provide a strong, well-rounded education for low-income students to help expand opportunity.

“What we’re doing here is a little bit against the grain in many ways,” he said. “It’s going against the grain in our society to have respect and empathy for people who are coming from low-income families and [to] believe it is not just important to talk about the role of education in transforming lives . . . but to do something about it.”