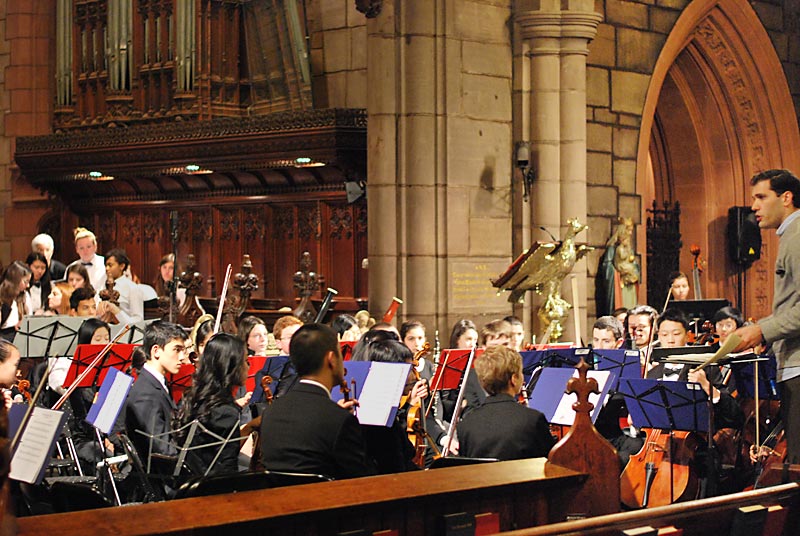 The partnership that has emerged with the Philadelphia Youth Orchestra and St. James School is ever-growing, including this splendid event to benefit St. James School, which yielded net proceeds of $3,185.

Renowned in the Philadelphia community for being foremost in music education and enrichment, The Philadelphia Youth Orchestra is home to gifted, young, classical musicians and is one of the oldest and most highly regarded youth orchestra organizations in the United States. For years, the Philadelphia Youth Orchestra has been performing at St. Mark’s Church on Locust Street, and play to benefit charitable organizations. St. James School caught the attention and tugged at the heart of Maestro Louis Scaglione, becoming the beneficiary of the 2011 and 2012 orchestra holiday concert.

On December 18, 2012, the orchestra hosted a benefit reception at the St. Mark’s rectory prior to the 90 minute performance. There were over 60 in attendance at a reception organized by Renee Dillon of PYO and Maria Newman of St. James School, catered by Alan Brody of Bryce’s Catering (Wynnewood, PA), and swathed in holiday décor by Terry James, a youth orchestra volunteer. Naomi Maloney, a proud parent of a student string virtuoso, and Jacob Roberts, Development Intern for St. James School, also were present to assist at the reception. Guests engaged with St. James School staff as well as ambassador students prior to joining the well-attended concert at St. Mark’s.

The evening included the works of J.S. Bach and Mendelssohn, along with songs and carols of the season, conducted by Mr. Geoffrey McDonald. Guest artists The Upper Darby High School Encore Singers also performed and closed with a medley of Christmas favorites. They were joined by the St. James Choir Club as well as the audience.

During the brief mid-concert stretch, The Reverend Sean E. Mullen (Rector of St. Mark’s Church) joined Maestro Louis Scaglione in thanking the talented musicians, their families, all the supporters, and the audience who turned out for this magical event. Father Mullen turned over the microphone to Head of School David Kasievich who echoed the gratitude and presented a short but rivetting video by Al Cassidy of the work and impact at St. James School.

The Philadelphia Youth Orchestra has made a very significant impact in giving of their time and talent.