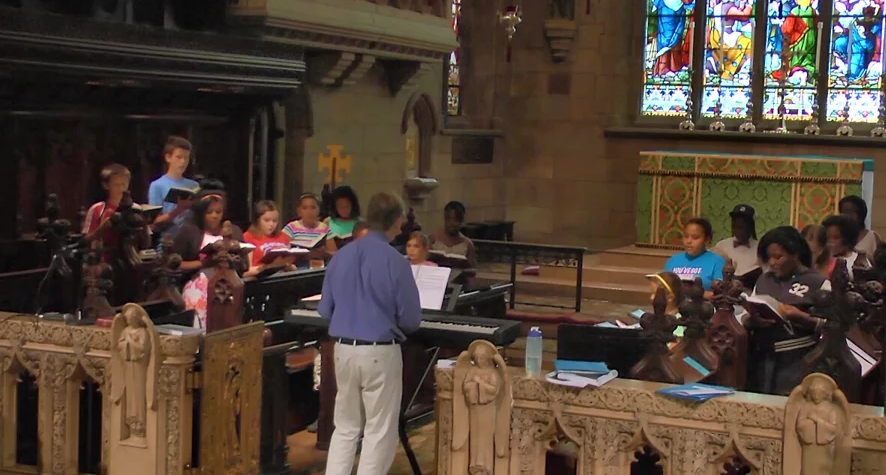 During the first week of August, Saint Mark’s Church presented a music camp for over 40 children ranging from 3 to 15 years of age. The camp was divided into two groups with children ages 3-8 participating in Vacation Music School and children ages 9-15 participating in Summer Choir Camp. Several St. James School students participated in the Summer Choir Camp, and were joined by other children from Philadelphia, Pittsburgh and New Jersey. Dr. Darryl Roland (St. James School Music Teacher) directed campers each day in 3 hours of singing, beginning with rehearsal in the choir room, singing a variety of vocal warmups, focusing on vowel production and placement, and learning new repertoire. In the afternoon, campers moved to Saint Mark’s Church to rehearse in the elegantly carved choir stalls, where they focused on polishing and refining music that learned in the morning. Campers worked toward doing everything as an ensemble and with attention to detail.

Each morning included a presentation by a guest musician, including an opera singer, classical guitarist, organist, violinist and harpist. And drama instructors from the Walnut Street Theatre joined to instruct campers in improvisation. Students discovered that being a part of an acting ensemble has a lot of similarities to being a part of a choral ensemble.  Campers enjoyed practicing a variety of improvisational techniques which provided a good deal of physical activity and movement. The camp day also included some time when campers could divide themselves into smaller groups, playing a variety of board and card games as well as working on arts and crafts.

Family members of campers attended a final presentation where campers demonstrated what they had learned in the course of the week. Dr. Roland began by presenting a variety of choral techniques and directing several anthems and Walnut Street Theatre staff followed by leading the campers in several improvisations and a dramatic sketch. Campers had a lot of fun and felt a sense of pride in themselves for what they had accomplished in one week and parents were pleased to see, first hand, their children sing and act.

By clicking on the following link, you’re invited to see portions of our camp presentation!