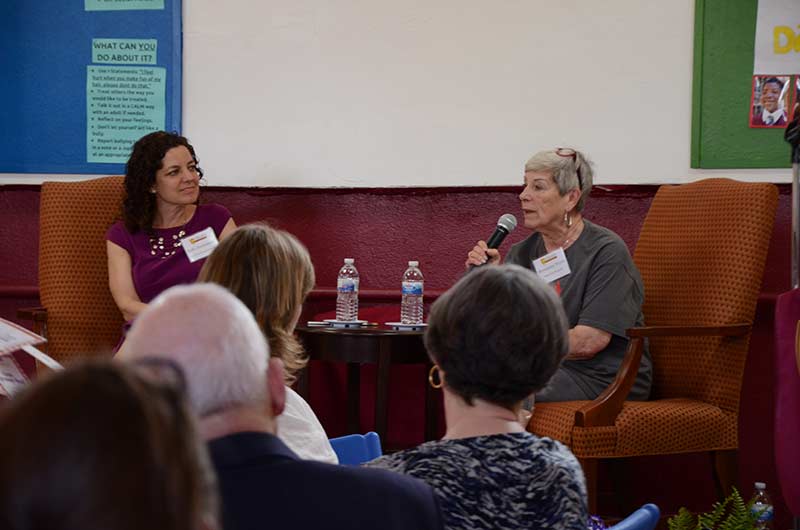 On Saturday April 18, St. James School hosted its 2nd Annual Forum titled Chat and Chew – Food Insecurity: An Educational Approach. The event brought over 120 friends and partners together to brainstorm solutions to one of Philadelphia’s most critical issues–hunger, and lack of access to healthy food in underresourced neighborhoods like Allegheny West. The day began with a prayer service in the historic Church of St. James the Less led by The Rt. Rev. Clifton Daniel III, featuring an impressive solo by 8th grade choir member Sydnee Reddy.

An insightful panel discussion was moderated by Marian Uhlman, founder of Healthy NewsWorks and a former reporter who was a finalist for the Pulitzer Prize through her work writing about health issues affecting Philadelphia. Joining Marian were Director of the Vetri Foundation for Children Kelly Herrenkohl and Executive Director of SHARE Food Program Steveanna Wynn, one of the region’s most dedicated antihunger advocates.

“It makes people feel better for me to say food insecure than to say people are hungry in our city,” said Wynn. “But ¼ of our city is hungry. When we’re taking about schools, we’re talking about students not having the right food to eat to stay healthy and focused. Part of what you can do today is to talk about the healthy lunch you had here today. Maybe one of the most important things you can do is add all of us to your list of prayers every day.”

Wynn shared that she has seen services decreasing, and one of the most important things people can do is to increase and spread awareness of the seriousness of the problem.

Schools can play a vital role, according to Kelly Herrenkohl, but they continue to struggle with staffing, as important roles like librarians and nurses are eliminated due to budget cuts.

“The schools need help,” said Herrenkohl. “To teach kids about protein and carbohydrates is one thing. But to get their hands into the food is another. Like feeling an onion and cutting it open…can go so much further. And getting kids with their families involved in learning can go a long way.”

Wynn added, “The only way were going to make a change is when we look at ourselves as a village and not as a silo. Because we know it takes a village to raise a child.”

During the discussion portion of the forum, a guest spoke emotionally about the lack of food options in her own neighborhood. “I live in South Philly and was cooking,” she stated. “I needed a carrot. I live in the community and can drive to a grocery store, but most people need to walk. I went the neighborhood supermarket and there was no fresh fruit and no vegetables. These people had no fresh food. I came here today to find out how I can help. I want to help.”

Many students, especially those who qualify for free or reduced lunch, receive 50% or more of their calories from their school–there’s a unique opportunity to educate students about healthy choices.

The forum’s moderator, Marian Uhlman, added positively that, “I started covering nutrition at the Philadelphia Inquirer in 1999-2000, and I’ve noticed that nutrition awareness has grown since then.”

The 2nd annual event concluded with a rousing awards ceremony in which some 30 groups and individuals were recognized for their service to St. James School.

The Church of the Good Samaritan
Builder’s Award

ECHOES Around the World
Building the Future Award