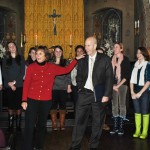 The St. James School community had the pleasure of hosting The Agnes Irwin School’s Bel Contos Singers for a morning performance in St. Joseph’s Chapel. St. James School Advisory Board member and former Lower School Head of Agnes Irwin, Joyce Rehorst, had the honor of introducing her former students and colleagues to our school.

St. James School students were treated to an array of choral pieces from sacred to African, American oldies to familiar holiday songs. Under the direction of Murray Savar–director of music at Agnes Irwin School–Mr. Savar engaged the students in every aspect of the performance, which ended with them showcasing their musical talents during the rousing hymn “We are Marching.” 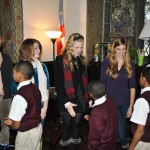 Founded in 1869 by Miss Agnes Irwin–the first dean of Radcliffe College and the great-great-granddaughter of Benjamin Franklin–The Agnes Irwin School was one of the first schools in the United States devoted to the education of girls and young women. As a headmistress at the age of just 28, Miss Agnes Irwin would create an institution that emphasized “disciplined and precise thinking,” where girls could flourish in a classical curriculum that included a range of study in English, modern and classical languages, history, mathematics and science. Miss Agnes Irwin is buried in the historic cemetery of the Church of St. James the Less just across the street from St. James School.