St. James School will be premiering the Philadelphia area showing of the cross country bike ride to “break the cycle of poverty.” It is called LVs Ride, A Coast to Coast Movement. The showing will take place at the school on

All are invited to attend and encouraged to RSVP dkasievich@stjamesphila.org no later than Monday, March 5th.

What is most exciting about LVs Ride is that St. James School played a key role in helping the riders across their long 3,646 mile journey during two months of the 2011 summer. St James School, an Episcopal NativityMiguel School located in North Philadelphia, is modeled after the Epiphany School, in Dorchester, MA. In addition, St. James School is a member of NAES (National Association of Episcopal Schools) and EUSA (Episcopal Urban School Alliance).

In the late spring of 2011, Executive Director David Kaseivich was in full swing preparing for the opening of St. James School. The founding class of 16 students was still somewhere on the horizon, and a list of priorities included solving the transportation of students to and from events, field trips, extracurricular activities and more.

Sadly, the closing of a school in Camden, NJ, provided just the solution. San Miguel School needed to sell two vans, and David was in need of at least one of them.

Coincidentally, another group also had their eye on that van. It was the Lasallian Volunteers, a faith-based organization of post-graduate students volunteering 1 to 2 years of their life to educate children in some of America’s most needed cities. The Lasallian Volunteers (LVs) were planning a cross-country bicycle ride to promote their program and to also raise awareness of the staggering levels of poverty in our country today.

David, having been the director of Lasallian Volunteers in the early 2000s, quickly learned of their dual need for a van. Then an idea occurred: with the help of Al Cassidy (St. James School’s communication and design director) and Br. Ed Phelan (a Christian Brother and spiritual leader for the LVs), David decided to purchase the van and rent it to the volunteers for their summer trip. This proved to be a very exciting opportunity for both.

Once the van (with trailer in tow) was wrapped with graphics to promote the riders as they made their way from Oregon to New Jersey, David handed the keys off to the ride team.

The trip began June 14, 2011 and ended August 14, 2011. The entire ride was captured on camera, with photos and videos shared almost daily on the ride’s website, http://www.LVsRide.com. Students of the After School at St. James program and at City Camp, along with staff and others, tracked their van along the website’s route map as it supported the daily food and drinking needs of riders going 75-100 miles per day. 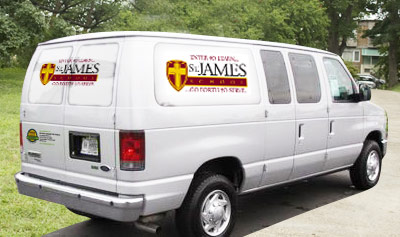 When the van returned home to St. James School, the graphics were removed and replaced with the new St. James School logo. The ride was over, and school was about to begin.

But work had only just begun on the editing of an LVs Ride documentary. Al Cassidy led in the production and creation—together with the ride’s volunteer filmmaker Nishant Gogna—of what has become a 40-minute film telling the story of roughly 15 riders who were joined not only by hundreds along the route, but thousands across the country and around the world.

We hope you will join us in sharing the experience of LVs Ride!