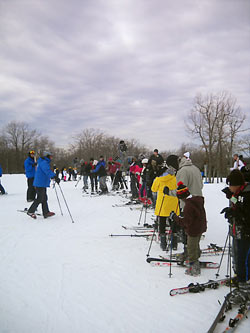 This year’s ski trip with Urban Blazers was one of the most anticipated outings of the year and it did not disappoint.

On Friday, February 22, the 5th and 6th grade classes piled onto a bus with their teachers and Urban Blazers staff/volunteers en route to the Pocono Mountains.

Upon arrival at Jack Frost Big Boulder, the students entered the rental shop to find the proper equipment. They had their skis fitted, picked out the proper size poles and helped one another put them on — one of the more difficult parts of skiing. They then met their ski instructors for a lesson.

This was the first time on skis for the 5th graders while the 6th graders had some brushing up to do on what they learned last year. After getting comfortable on their skis and learning to turn, stop and get up after a fall, the students hit the slopes with their teachers and Urban Blazers volunteers.

The trip proved to be a great opportunity for the entire school to bond and reinforce a common bond between Urban Blazers and St. James School.  Eric Dolaway, Director of Urban Blazers, reflected on his favorite memory from the ski trip:

“I was approached by a very frustrated student who wanted to give up on skiing because this student kept falling. One of this student’s classmates came up to us as we were speaking and offered some encouraging word and then offered to help his classmate. This student then spent the rest of the day helping this classmate master turning and stopping.  At the end of the day this student was extremely proud to report to me that his classmate had made it down the slope without falling once!”

The success of the trip was partly due to the generosity of donors who helped raise close to $1,000 in order for the entire class to go.