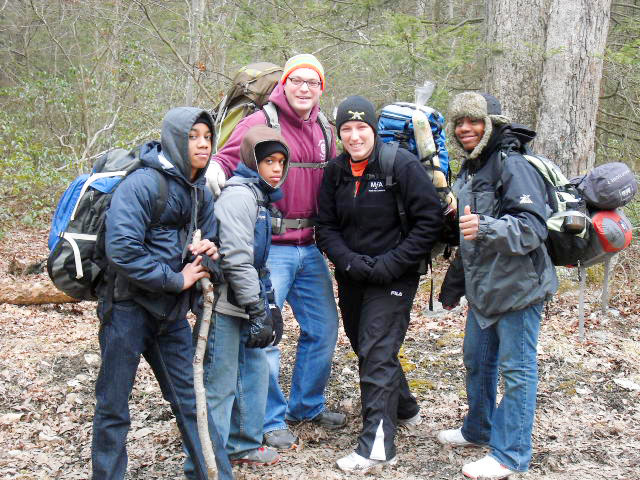 St. James School partner and Religion Advisor Andrew Kellner — Family Ministry for Episcopal Diocese of Pennsylvania — invited parents of 6th graders to consider the first spring break hiking trip. Students would be given the opportunity to hike and camp two nights along the Appalachian Trail, accomplishing a solid 8 or more miles per day.

By the start of spring break, three students — Jamaal Oliver, Ezekiel McLeod and John Taylor — had signed up and gone through the proper orientation prior to the hike. After a driving tour of Gettysburg, the students made their way to a trail point and the start of their trip. They finished stronger not only as young men, but as brothers. All told, they hiked nearly 20 miles and slept in subfreezing temperatures. 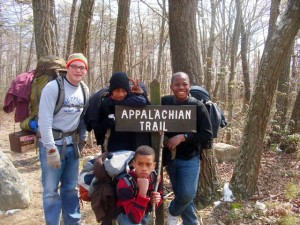 There are three reasons why this hike was awesome:

#1 We got to sleep outside like people in the wilderness and we got to experience a real adventure other than just sleeping in the back yard.

#2 We hiked twenty miles and no one gave up, we showed great teamwork and unity by encouraging each other.

#3 It helped John, Ezekiel and I to become men.  No one can call us lazy anymore, because we tried our best and accomplished our goal.

I lift my eyes up to the hills; from where is my help to come.

Three young men on an adventure, into a wilderness the likes of which none had experienced before. With bags packed with food and supplies for the journey, they set out. Their spirits were high and their imaginations filled with what they might find around the next bend and over the next hill.

We invited these three young men to head to the hills, to expand their hearts and minds. The journey required them to work together and see each other differently. As they sat semi-exhausted in a pile, one young man turned to us and said, “This changes how we see each other, doesn’t it?” Indeed the journey together did change these young men and they began to see that together they could overcome the obstacles they would face.

They not only looked up to the hills, but climbed up and down mountains. There they found that their help was not far from them but as near as looking into each other and themselves. Their words of encouragement to each other were words of belonging; words of significance. Their teamwork and assistance when the trail was hard were incarnate tangible works of love. They looked up to the hills and found their help, exploring the creation God has made and being for each other the witness of God’s love for each of them. 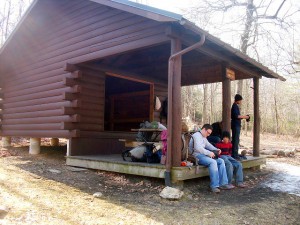 The hike began after a drive through tour of the Gettysburg battlefields. The first day we hiked 8 miles in 40˚ weather, including several strenuous uphill sections. One highlight was meeting “Mr. Joe,” who was training for an upcoming through-hike of the Pacific Crest Trail. In 1979, Mr. Joe through walked the entire Appalachian Trail. We spent the night at Birch Run Shelter, where the temperature plummeted to 22˚. Our second day was 10 miles long and included a variety of forests. We spotted several blue birds and what we think was a bear print. The students did a fantastic job tackling the trail and carrying heavy packs without complaint.

The hike was fun. We got to sleep in tents, which I had never done before. At first I did not want to go but now I’m glad I went.

The hike was awesome. I got to sleep in a tent on the hiking trail. We were supposed to finish the hike on Monday but we finished on Sunday. If we had the chance to do it again I would do it. We met a man named Joe that hiked the whole Appalachian Trail.